THEVA Superconductors – From a research project to industrial production

Nobel Prize in Physics for Dr Johannes Georg Bednorz and Dr Karl Alex Müller
The history of superconductors is already over 100 years old. The phenomenon was discovered at the beginning of the 20th century by the Dutchman Heike Kamerlingh Onnes, but at very low temperatures near absolute zero. In the following decades, the findings were mainly used to generate magnetic fields, for example in large particle accelerators or in magnetic resonance imaging. The breakthrough for superconductors came in 1986, when the two physicists Dr. Johannes Georg Bednorz and Prof. Karl Alex Müller discovered a compound that becomes superconductive at a much higher transition temperature. The high temperature superconductors were born. The two researchers were awarded the Nobel Prize in Physics the following year “for their groundbreaking discovery of superconductivity in ceramic materials”. Because of the lower cooling requirements, the new ceramic superconductors were now also of interest for energy technology. With their research work and the attention this topic received through the awards, the scientists laid the foundations for the first practical applications. The AmpaCity project funded by the Federal Ministry of Economics and Technology (BMWi) and the EU project EcoSwing are prominent examples of the ongoing breakthrough. They are trend-setting in their application of HTS technology because they provide completely new approaches for space-saving and particularly energy-efficient power transmission. THEVA as supplier of the HTS coils for a compact 3.6 MW wind turbine generator within the EcoSwing project contributes to this success story. Since a few months this worldwide first HTS wind turbine generator has been rotating and delivering energy in Thyborøn on the stormy Danish north coast. “I am convinced that superconductivity with its manifold applications will find its way into many areas of our everyday life”, said physicist and Nobel Prize winner Dr. Georg Bednorz in an interview in 2011. Since 2017, the scientist is a member of THEVA’s Senior Advisory Council and participates as an expert consultant in making this a reality… 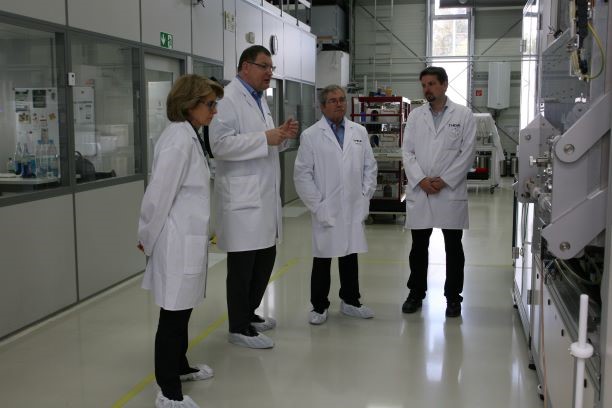 Superconductors on the way to competitiveness
The production of HTS wires is highly complex and explains the long development time. But the visionary makers from Ismaning believe that this technology is on the verge of a breakthrough for widespread use. With a lot of perseverance and stamina, they are on the verge of creating something that will set standards in the field of power transmission. Following the construction of the production hall in 2014 and the start of production in 2015, the focus is now primarily on optimizing the manufacturing process and thus reducing costs. The manufacturing process developed and patented by THEVA allows scaling to larger production volumes and thus reducing costs. Thus, the innovative company is well on the way to make high-temperature superconductors cheaper than copper and thus to offer a real alternative to conventional technology. The following areas of application are at the forefront: Superconductors are considered to be a forward-looking solution for space-saving and particularly energy-efficient transmission of electricity in cities but also overland. Compact superconductor ground cables are replacing large copper ground cable systems or even overhead lines over shorter distances and at critical points. The advantages of the technology are a tight and simple layout, retrofit possibilities, no ground heating and no electromagnetic fields to the outside. This is a decisive advance for efficient management and laying in agricultural areas and residential areas.
As far as electric machines are concerned, the focus will be on the construction of smaller and more compact generators for wind turbines, as in the EcoSwing project, the construction of large generators, large engines for ships, and light high-performance propulsion systems that make electric flying possible in the first place.
There is also the broad field of magnetic technology with fusion, medical technology (MRT) and induction heaters – for the latter Petra Bültmann-Steffin and Dr. Carsten Bührer received the Deutschen Umweltpreis 2009 (German Environmental Award). Now THEVA, together with partners from industry and the Karlsruhe Institute of Technology (KIT), has taken up the further development of this highly efficient device for metal forming again to continue a piece of German industrial history. With its 50 employees, THEVA Dünnschichttechnik GmbH, founded in 1996, consistently pursues the goal to use its knowledge advantage and to keep the know-how on superconductor technology at the business location Germany. With contacts in Asia and the USA, the company is also present for its customers worldwide. Whether electric flying, e-mobility, smart city or energy revolution – only with superconductors can the full potential of all these developments be fully exploited. The demand for strip conductors will therefore increase. THEVA is already planning to expand its production capacities for several major projects. Further investment partners are therefore being sought.